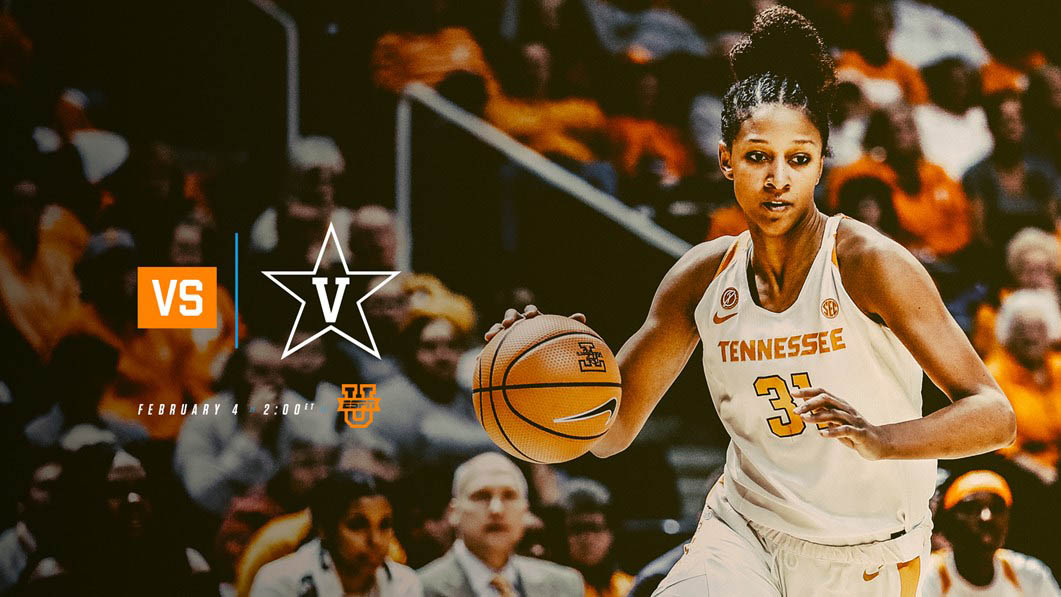 This will mark the second meeting this season between these teams. The (then) #7/7 Lady Vols held off Vanderbilt in Knoxville on January 7th by a score of 86-73. That victory gave Tennessee a 15-0 record at that point. 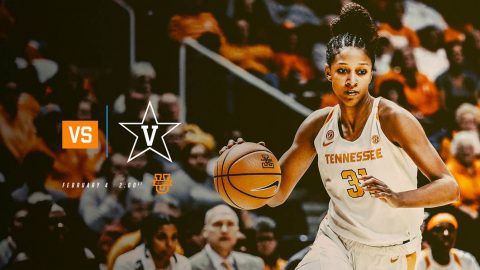 The Big Orange and the Commodores will face off for the 80th time in the series, with UT holding a 70-9 advantage and winning the past eight encounters.

The Lady Vols have come out on top in two of their past three contests of late. On Thursday night in Knoxville, the Lady Vols avenged a loss earlier this season in College Station by turning the tables on the #14/12 Texas A&M Aggies in Knoxville, 82-67.

Vanderbilt enters having lost three of four and seven of its past nine. The Commodores, however, were victors in their last game, taking down Ole Miss in Oxford on Thursday night, 75-72.

Roy Philpott (play-by-play) and Brooke Weisbrod (analyst) will describe the action for the UT-Vanderbilt TV broadcast on ESPNU.

Tennessee is in a stretch where it is playing three out of four games on the road, with the Vandy game serving as the second away date.

After facing Vanderbilt, UT next heads to Arkansas at 7:00pm CT (8:00 ET) on February 8th. That game will be carried by SECN+.

UT is back at home on February 11th, when Georgia comes to Rocky Top for the annual “Live Pink, Bleed Orange” game at 2:00pm CT on the SEC Network.

The Latest on Tennessee

She is on track to become only the sixth Lady Vol to reach 1,000 points and rebounds. The others in that club are Chamique Holdsclaw, Glory Johnson, Bashaara Graves, Sheila Frost and Tamika Catchings.

UT is 13-1 vs. unranked teams this season and had won 14 in a row vs. squads outside the top 25, including last year’s NCAA First Round win over Dayton, until LSU knocked off the Lady Vols on Jan. 28.

Tennessee is 16-1 when it outrebounds its opponents and 1-3 when it doesn’t.

After turning the ball over 28 times vs. Notre Dame, UT has averaged 13.5 turnovers in its last four contests with point guard Evina Westbrook averaging only one per contest over the last three games after notching 3.9 over the first 19 outings this season.

In Lady Vol history, the most recent long streak for the same starting five reached 11 games in 2007-08, when Pat Summitt chose the same lineup of Candace Parker, Angie Bjorklund, Nicky Anosike, Shannon Bobbitt and Alexis Hornbuckle to report for the opening tip. UT went 10-1 in that span and went on to win the NCAA title with a 34-3 record and the SEC title with a 14-0 mark. In game 12, in the team’s visit to Chicago, Parker missed curfew and didn’t get the starting nod vs. DePaul on January 2nd, 2008.

Tennessee has owned a double-digit advantage at the intermission in 11 contests.

UT has three starters averaging double figures in scoring, including seniors Jaime Nared (16.9) and Mercedes Russell (16.6), and freshman Rennia Davis (11.2). Freshmen Anastasia Hayes (9.9) and Evina Westbrook (9.5) are on the brink of double digits.

Tennessee has outscored its opponents in the points-in-the-paint category in 15 of 22 games, averaging a 41.4 to 32.5 difference.

The Lady Vols bested their foes in second chance points 13 times and tied on three occasions.

Tennessee has won the points on fast break war in 16 games, averaging 13.0 per contest. In losses, that number is 9.8.

In league games, Evina Westbrook has 50 assists vs. 33 turnovers while averaging 9.7 ppg.

Over the past seven games, Tennessee is out-rebounding its opponents 181-159 on the defensive end, but foes hold a 100-77 advantage on the offensive glass.

After a 71 to 58 assist-to-turnover comparison over the first 15 games, Evina Westbrook has a 40/20 balance over the final seven.

Holly Warlick is 10-1 as head coach vs. Vanderbilt, including 6-0 in Knoxville and 4-1 in Nashville.

The Lady Vols are a perfect 33-0 in Knoxville, 27-7 vs. the Commodores in Nashville, and 10-2 at neutral sites, with those being postseason games.

These squads have been to overtime on one occasion, with Tennessee seizing a 92-79 decision in Nashville on Jan. 19, 1997.

Tennessee is 8-1 during redshirt senior Mercedes Russell‘s time in Knoxville, while seniors Jaime Nared and Kortney Dunbar are 7-0 vs. VU.

Vandy has held Tennessee to 70 or fewer points in seven of the last nine visits to Memorial.

UT’s victorious 57-point sum in the 2015 meeting in Nashville, meanwhile, was the lowest ever by the Lady Vols in the series.

The UT women are 241-60-1 all-time vs. four-year college teams from the Volunteer State.

Last Meeting Between UT and VU

Redshirt senior Mercedes Russell paced No. 7 Tennessee with a career-high 33 points, as the seventh-ranked Lady Volunteers pulled away from Vanderbilt in the fourth period to secure an 86-73 victory on Jan. 7 in Thompson-Boling Arena.

With the win, the Lady Vols improved to 15-0, 3-0 in Southeastern Conference play, and won their 11th consecutive home game dating back to last season. Vanderbilt, meanwhile, fell to 4-13, 0-3 SEC.

Redshirt junior Cheridene Green also had a career day for the Big Orange, pouring in 17 points and grabbing five rebounds. Senior Jaime Nared chipped in 15 points, five rebounds and six steals as the Lady Vols remained unbeaten through their first 15 games for the fourth time in school history.

Vanderbilt was led in scoring by Cierra Walker, who went 6-of-8 from behind the three-point arc and finished the day with 20 points and six assists. Christa Reed (16), Chelsie Hall (15) and Erin Whalen (10) also scored in double figures for the Commodores, who dropped their third straight game and seventh in their last eight.

All five Lady Vol starters scored in double digits to lead Tennessee to a 70-57 victory over Vanderbilt on January 5th, 2017, at Memorial Gym.

Redshirt junior Mercedes Russell posted another dominant performance, scoring 15 points to go along with 13 rebounds for her ninth double-double of the season. She also tied a career-high in blocks with six to extend UT’s winning streak to six games.

Junior Jaime Nared had 12 points and six rebounds, with five of those coming on the offensive end of the floor. She also had two assists, two steals and a block.

Sophomore Meme Jackson was the fifth Lady Vol to reach double digits, scoring 10 points on the night, which marked the third time in the last four games she has reached double-digit scoring.

Lealea Carter fueled the offense for the Commodores, finishing with 17 points on 6-of-12 shooting and six rebounds.

VU is coached by Stephanie White, who played at Purdue and who coached Lady Vol great Tamika Catchings while she was head coach of the Indiana Fever.

Associate head coach Carolyn Peck was an assistant at Tennessee from 1993-95. She is from Jefferson City in East Tennessee.

Ten of 14 players are freshmen or sophomores.

Vandy was picked to finish 10th in the league by the coaches and 11th by the media.

The Vanderbilt women’s basketball team (6-17, 2-7 SEC) led from start to finish and secured its first SEC road win of the season with a 75-72 win over Ole Miss (11-11, 1-8 SEC) on Thursday in Oxford. Mississippi native Christa Reed led the way with 20 points, her fifth consecutive game in double figures.

Christa Reed reached double figures for the fifth straight game with 20 points. It was her second 20-point outing this season.

Senior Jaime Nared scored 23 points and No. 12/13 Tennessee allowed just eight points in the fourth quarter in an 82-67 win over No. 14/12 Texas A&M on Thursday night at Thompson-Boling Arena.