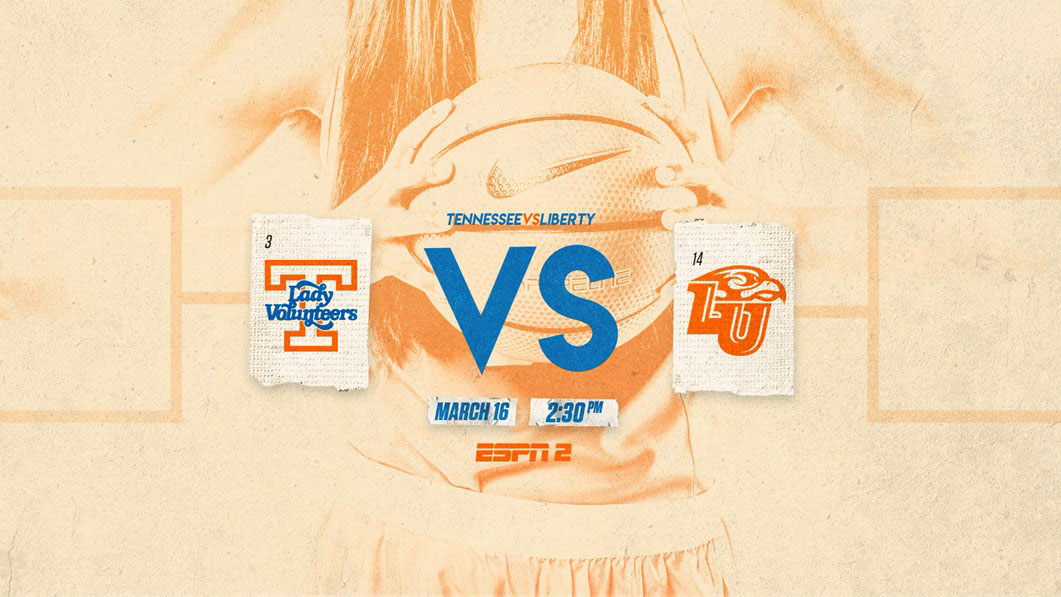 Knoxville, TN – As one of the top 16 overall seeds in the NCAA Division I Women’s Basketball Championship field, the University of Tennessee Lady Vols earned the right to host first and second round games. This marks UT’s initial time hosting women’s tourney games since 2015. 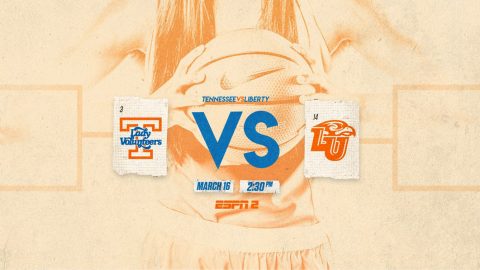 The winners of those games will face one another on Sunday (time to be determined) in Knoxville in the second round for the right to advance to the Sweet 16 in Lexington, KY.

No. 1 Louisville, No. 2 Baylor, No. 3 Tennessee and No. 4 Stanford are the top four seeds in the Lexington Regional.

The Lexington Regional contests are slated to be played on March 23rd and 25th in Rupp Arena.

Brenda VanLengen (play-by-play) and Carol Ross (analyst) will describe the action for the UT-Liberty television broadcast on ESPN2.

The Lady Vols are making their 37th appearance in the NCAA Women’s Basketball Championship, and UT is the only program to appear in all 37 tournaments.

Tennessee was an at-large qualifier for the tourney field, tying for fourth in the Southeastern Conference regular season and bowing out in the quarterfinal round of the league tourney to No. 7/7 South Carolina, the eventual champion.

Tennessee is second behind UConn in winning percentage at .816 in tourney play.

UT is 12-5 in NCAA play under Holly Warlick.

UT has made the Elite Eight 28 times and in three of the past five seasons, posting an 18-10 record in that round.

All told, UT has played 82 different opponents during all rounds of the NCAA tournament.

UT In The First & Second Rounds

Tennessee is making its 37th appearance in the NCAA First/Second Rounds, and it owns a 57-2 record during those games.

The Lady Vols are 29-1 all-time in the NCAA First Round and 28-1 in the NCAA Second Round.

This is Holly Warlick‘s sixth NCAA Tournament as a head coach and her 33rd as a member of the Tennessee staff.

Only four of Tennessee’s 10 players possess NCAA Tournament experience, but there are 30 combined games of tourney duty by that quartet.

Jaime Nared has played in 10 NCAA games, while Mercedes Russell, Kortney Dunbar and Meme Jackson have appeared in nine, six and five, respectively.

Nared and Russell have six starts apiece, with reach reporting to the jump circle in UT’s last six tourney games over the past two seasons.

Mercedes Russell has UT’s highest totals among active players for points and rebounds in an NCAA game, tallying a double-double of 25 points and 15 rebounds vs. Ohio State in 2016.

Russell is shooting .639 from the field (39-61) in nine career NCAA Tournament games.

Jaime Nared averaged 18.0 points and 9.0 rebounds per contest last season in two tourney games, hitting for 28 vs. Louisville and pulling down 11 boards.

Tennessee is seeking its 25th victory of the year, which would mark the 35th season the Lady Vols have reached that win total.

This would mark the fourth 25-win campaign under Holly Warlick, with the Lady Vols last achieving that total during a 30-6 season in 2014-15.

The Lady Vols won No. 20 last season in the NCAA First Round over Dayton on March 18th in Louisville, KY.

Tennessee enters the NCAA Tournament having won three of its last four games, including a win over #7 South Carolina.

Seniors Jaime Nared and Mercedes Russell have been quite durable, with Nared starting the last 87 games for UT and Russell getting the nod in 67 consecutive games entering the NCAA Tournament.

Tennessee has been strong at home this season, winning 13 of 15 games and outscoring opponents, 79.5 to 59.6 in Knoxville.

Mercedes Russell‘s 10-for-10 effort at the free throw line vs. Auburn tied an SEC Tournament single-game record. It was the fourth-best all-time by a Lady Vol in any game. Entering the NCAA Tournament, she has hit her last 19 free throws in a row, dating back to the Alabama game.

Russell now stands alone with a record 15 double-doubles by a UT senior and is tied with Candace Parker for second-most ever by a Lady Vol behind only Chamique Holdsclaw (57). Russell had a UT junior-record 19 double-doubles a year ago.

The Lady Vols have won the rebounding battle in 25 of 31 games this season, including eight of the last nine games.

UT has led 24 of 31 games this season at the half. UT trailed Mississippi State by 13, South Carolina (SEC) by 10, Missouri by six, Alabama by five, South Carolina (home) by five and Auburn (SEC Tourn.) by three, and was tied vs. Auburn (home).

When UT has more fouls than its opponent, the Lady Vols are 2-5, losing to Texas A&M, Notre Dame, LSU, Missouri and South Carolina (SEC Tourney), and beating Marquette in OT and winning by 14 at Kentucky.

The Lady Vols and Liberty will meet for just the second time, with UT holding a 1-0 advantage in the series.

All-five Tennessee starters scored in double figures, as the No. 1-ranked Lady Vols rolled past Liberty, 102-58, in the NCAA First Round in Knoxville on March 14th, 1998, to remain unbeaten.

The Lady Flames held the lead in the opening six minutes of play before the home team surged to a  19-point halftime lead and went on to hand Liberty its only loss of the season.

UT had a 62-16 points-in-the-paint advantage and forced the Lady Flames into 27 turnovers.

Twins Sharon (26) and Sarah Wilkerson (10) combined for 36 points to aid the Liberty cause, while Elena Kisseleva chipped in 10 as well.

No. 1 seed Liberty utilized rebounding and a stifling defense to overcome an early deficit and top No. 3 seed and two-time defending champion UNC Asheville, 60-42, in the 2018 Big South Women’s Basketball Championship title game at the Vines Center in Lynchburg, VA, on Sunday.

Liberty (24-9) dominated the rebounding (44-30), points in the paint (28-12) and second-chance points (19-9) categories, led by tournament MVP KK Barbour (10 points, six rebounds), who scored in double figures for the third straight game on the weekend.

The Lady Flames posted their eighth consecutive victory overall and closed out their first unbeaten home season since 2007-08 with a 15-0 record at the Vines Center. Liberty got to cut down the nets on its home court for the first time since 2006 and the seventh time in program history.

About The Liberty Lady Flames

Head coach Carey Green is a native of Louisville, Tenn., and 1974 graduate of Friendsville (Tennessee) High School and earned his associate’s degree from Roane State in 1976.

After graduating from Coastal Carolina in 1979, Green earned a master’s in science education from Tennessee in 1981.

He served as assistant at Clemson from 1987-99 before joining Liberty as head coach in 1999.

The Lady Flames (24-9, 16-2 Big South) earned their 17th trip to the NCAA Division I Women’s Basketball Championship in the last 22 years.

Sheana Vega, one of two seniors on the roster, is the lone remaining Lady Flame from the 2015 NCAA Tournament team and the only current player who has ever been to the “Big Dance.”

Liberty has won a season-high eight games in a row and is 15-1 in its last 16 outings. Defense has fueled the Lady Flames’ success, as Liberty has held 17 straight opponents below the 60-point mark and is allowing just 53.7 ppg for the season.

The Tennessee-Liberty match-up is a repeat of the 1998 NCAA First Round in Knoxville, and the second round also features a potential for a repeat engagement.

Western Kentucky, the Lady Vols’ Second-Round opponent in Knoxville back in 1998 is on hand again in 2018 as a No. 11 seed, this time facing #13/12-ranked Oregon State in the first round.

UT is 7-1 all-time vs. Western Kentucky.

UT has three players from Oregon on its roster, while OSU has three.

No. 12 Tennessee erased a 16-point first-half deficit and closed within three in the third quarter but couldn’t overcome No. 8 South Carolina, falling 73-62 in the quarterfinals of the SEC Tournament at Bridgestone Arena in Nashville on March 2nd.

Freshman Anastasia Hayes led Tennessee (24-7) in scoring, tying her career high of 17 points. Senior Jaime Nared posted a double-double for Tennessee with 15 points and 13 rebounds, playing her ninth 40-minute game of the season.