Nashville, TN – A quarantine for Emerald Ash Borer, an invasive insect that destroys ash trees has been expanded to include more Tennessee counties. Bradley County, McMinn County, Meigs County and Polk County have been added to the list of areas restricted for the movement of ash trees and ash tree products.

EAB was recently found in McMinn and Polk counties and it is believed that EAB is also likely to be present in Bradley and Meigs counties. This brings the total number of Tennessee counties under a state and federal EAB quarantine to 38.

Over the past three years, the USDA Animal and Plant Health Inspection Service and the Tennessee Department of Agriculture have regulated only the counties where at least one EAB specimen was detected.

But because small EAB populations can sometimes go undetected, TDA is taking the precautionary measure of expanding the EAB quarantine to some counties without a positive detection where EAB is likely present.

“We think it’s in the best interest of the state to quarantine locations where we believe EAB could be located even though we haven’t found it yet,” Gray Haun, TDA’s Plant Certification administrator said. “For example, Sullivan County and Washington County were placed under quarantine earlier this year because we suspected EAB was there and just recently we were able to confirm it.”

Quarantining the additional counties will actually reduce the regulatory burden on the forest products industry and consumers across the region. 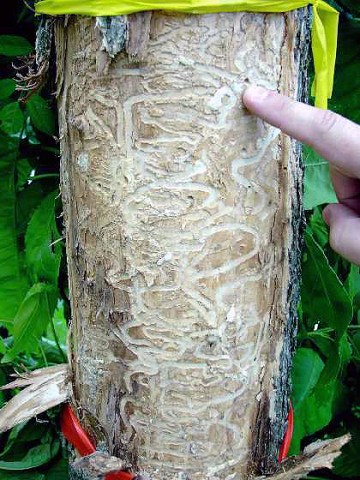 Currently, anyone moving ash product or ash firewood from a quarantine area to a non-quarantine area must be under a compliance agreement with USDA-APHIS and TDA and ash logs can only move during non-flight periods for the pest. The quarantine expansion will allow the free movement of ash materials across contiguous counties within the quarantine area.

The insect has been previously found through the EAB detection program deployed by TDA and USDA-APHIS where purple box traps are placed in trees.

EAB is a destructive forest pest that was introduced from Asia into the United States in the 1990’s. Over the past decade, EAB has spread to 24 states and parts of Canada. This pest was first detected in Tennessee in 2010 in Knox County. Since that time, it has spread to 29 counties throughout East and Middle Tennessee.

The EAB quarantine prohibits the movement of firewood, ash nursery stock, ash timber and other material that can spread EAB.

Citizens should report any symptomatic ash trees to TDA and follow these simple rules:

For more information about EAB and other destructive forest pests in Tennessee, visit the new website: www.protecttnforests.org . The site is a multi-agency effort to inform and educate Tennesseans on the harmful impacts insects and diseases have on our trees, where the problem spots are, and what landowners can do to help protect their trees.

EAB attacks only ash trees. It is believed to have been introduced into the Detroit, MI area approximately 20 years ago on wood packing material from Asia. Since then, the destructive insect has killed millions of ash trees across several states including Michigan, Illinois, Indiana, Iowa, Kansas, Kentucky, Maryland, Minnesota, Missouri, New York, Ohio, Pennsylvania, Virginia, West Virginia and Wisconsin.

For more information about other TDA programs and services visit www.tn.gov/agriculture