UT will use its SEC bye this weekend, traveling to northern Indiana on Sunday to take on Notre Dame in an ESPN2 Big Monday tilt at 7:00pm ET/6:00pm CT.

UT is 12-1 vs. the Razorbacks in Knoxville, with the only loss at Thompson-Boling Arena coming on February 23rd, 2013, when Arkansas walked away with a 72-71 overtime victory and ended an 18-game Lady Vol winning streak in the series.

Despite the series disparity, Tennessee has overcome significant deficits to win its last three games vs. UA and fell to the Razorbacks in overtime, 72-71, in Knoxville on February 23rd, 2012 in Pat Summitt’s final campaign.

Tennessee has been ranked in the top 25 in all 28 prior meetings with Arkansas, while the Razorbacks have been ranked in just five meetings. The last time the two teams faced each other as ranked squads was in 2003 when #4-ranked Tennessee won 92-79 over #12-ranked Arkansas in Fayetteville.

Tennessee has had one player from the state of Arkansas in its history. Standout Shekinna Stricklen (2008-12) hailed from Morrilton, AR.

About the Arkansas Razorbacks 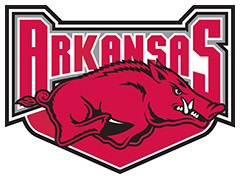 UT played both Oregon State and Texas this season, defeating the Beavers in Corvallis, 53-50, and losing to the Longhorns in Knoxville, 64-53.

In Arkansas’ last game, at Mississippi State, the Bulldogs led by as many as 28 before prevailing by 25.

The Razorbacks’ top scorer, forward Jessica Jackson, led all scorers vs. MSU with 20 points. Melissa Wolff pulled down a game-high 10 rebounds. Jackson averages 17.0 points per contest and is the only player on the team in double figures.

Arkansas is coached by second-year skipper Jimmy Dykes, who is 24-24.

Tennessee bounced back from a loss to Florida with a rousing 79-52 victory over Auburn on Sunday afternoon. UT has won four of its last five games after struggling through a stretch where it lost three of five.

The Lady Vols recorded their highest shooting percentage of the season, hitting 59.6% (34-57) vs. the Tigers after shooting their lowest percentage (29.3%) vs. Florida. The Big Orange women held AU to 29.4% from the field, the second lowest UT allowed all season.

Diamond DeShields tied a career high with seven assists in the game.

Tennessee held Auburn ace Brandy Montgomery, who had been averaged more than 17.0 points per game, to 11 on 4-of-13 shooting. UT’s +12 rebounding margin was its second best of the season behind +15 vs. Stetson on December 30th.

Diamond DeShields leads Tennessee in scoring at 15.3 per game and adds 5.5 rebounds. Mercedes Russell (11.2) and Bashaara Graves (11.1) round out UT’s double-figure scorers. Graves (8.7) and Russell (8.5) are Tennessee’s top rebounders.

UT improved its season shooting percentage to 41.6% and its free throw number to 71.7%.

Tennessee has the nation’s No. 1 ranked strength of schedule this season, according to the NCAA. UT’s opponents thus far have a .731 winning percentage (152-56), and its future opponents are winning at a .741 rate (129-45). The Lady Vols stayed at No. 10 in the RPI after the win over Auburn.

Tennessee had 20 assists vs. Auburn, marking only the third time in 2015-16 that UT had posted 20 or more. UT is averaging 7.0 blocks per game over the last three contests, tying a season-high with eight vs. Auburn.

Diamond DeShields is averaging 17.3 points and 6.3 rebounds in SEC contests. Alexa Middleton is hitting 53.3% from the field (8-15) in SEC play to lead UT. Bashaara Graves is averaging a double-double of 11.7 points and 10.7 rebounds in league action. Andraya Carter is hitting .500 (5-10) on three-pointers in her first three SEC games, raising her season percentage to a team-leading .304 (7-23).

Six Lady Vols have combined to miss 39 games this season due to injuries, making it a slow process for UT to develop on-court chemistry and continuity this season. Nia Moore has pushed UT’s available player list back up to 11, playing four minutes vs. Auburn. It marked the most Lady Vols in action since 11 played vs. both Syracuse and Chattanooga on November 20th and November 23rd.