HomeNewsAAA reports only 12 States have Gas Price Average of $2.00/Gallon or...
News

AAA reports only 12 States have Gas Price Average of $2.00/Gallon or More

Tampa, FL – As gas prices continue to push cheaper across the country, only one dozen states carry an average of $2.00/gallon or more. The national average is $1.77, which is four cents less than last week, 28 cents cheaper than last month and $1.11 less than a year ago.

Crude oil prices were extremely volatile last week, pushing negative for the first time ever, but they did make significant gains to end the week in the positive.

Low demand pushed gasoline stocks to increase for yet another week, this time by 1 million bbl to put total U.S. stock levels at 263 million bbl.

“AAA forecasts that the national average will continue to decrease into next month, possibly dropping as low as $1.65,” said Jeanette Casselano, AAA spokesperson. “We haven’t seen gas prices that cheap since January 2009.”

Some states could see minimal fluctuation at the pump in coming weeks if demand jumps as businesses are given the green light to re-open. However, this will not have a large impact for the majority of the nation’s motorists. 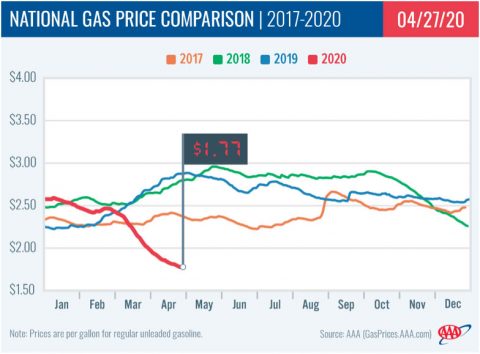 Pump price averages continue to decline among South and Southeast states, though the rate at which they are declining has slowed compared to earlier this month. In the last seven days, most states saw averages decrease by three or four cents.

Gasoline stocks continue to trend higher for the month of April in the region. The latest data from EIA shows a 1.2 million bbl increase to bring total stock levels to 87.1 million bbl. Regional refinery utilization decreased for a second week, now down to 73%. Typically, April sees regional refinery rates in the 90% range. Rates could continue to decrease as regional refineries reduce production combined with the fact that the Gallup New Mexico refinery has temporarily idled operations in response to low demand and growing stocks.

On the week, motorists filling-up in Washington, D.C. (+3 cents) saw an increase at the pump. This was not just the only increase in the Mid-Atlantic and Northeast region, but also the country. The majority of states in the region saw weekly decreases of two to four cents.

Gasoline stocks in the region have been steadily increasing for a month now. The EIA’s latest report shows a weekly build of 2 million bbl, pushing regional stock levels to a very healthy 73.8 million bbl. Since February, regional refinery utilization has been on the decline. However, for the week ending April 17th, utilization increased nearly 5% to 44%. Motorists in the region can expect gas prices to continue to decrease in the coming weeks.

Regional refinery utilization bumped up by nearly 2% to 65%, while gasoline stocks decreased minimally by 200,000 bbl. Regional stock levels measure at 8.9 million bbl, which is one of the highest stock levels recorded by the EIA during the month of April. Gas prices are expected to continue to decrease in the week ahead and could again see some of the largest declines in the country. 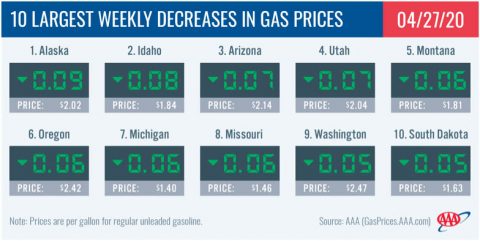 At the end of Friday’s formal trading session, WTI increased by 44 cents to settle at $16.94 per barrel. Crude prices have recovered after turning negative last week for the first time since trading in 1983. Last week’s decline in prices has been attributed to many factors, including the inability of market traders who owned oil futures to find other market participants to sell their futures contracts to and limited available crude storage options.

Crude prices started to push more expensive by the end of last week in response to reports of the Organization of the Petroleum Exporting Countries (OPEC) reducing crude output before the May 1st start date of its 9.7 million b/d production reduction agreement for May and June 2020. Crude prices will likely remain volatile this week, as the market continues to assess how much crude demand will continue to fall during the ongoing pandemic.