“Week by week, we are seeing mostly regional fluctuation at the pump based on gasoline supply and demand,” Casselano stated.

At 8.6 million b/d, the Energy Information Administration (EIA) measures demand at a 1% decrease week-over-week, 9% increase month-over-month and a 6% decrease year-over-year.

Meanwhile, gasoline stocks measure at a 1% weekly decline, a 3% decrease month-over-month, but a 7% increase compared to last year. 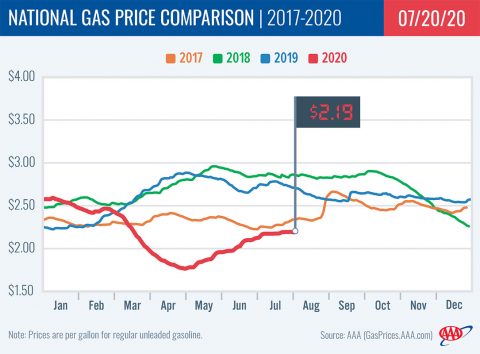 On the week, North Carolina (-3 cents), West Virginia (-2 cents) and Maine (+2 cents) saw the largest swings at the pump on the week. All other Mid-Atlantic and Northeast state averages increased or decreased by a penny, while others saw no change at all. Gas prices in the region range from $2.43 in Pennsylvania to $2.00 in Virginia.

Stock levels declined for a third week, this time by 1.3 million bbl. At 71 million bbl, total stocks are at their lowest point since May. However, levels are at an 11.5 million bbl year-over-year surplus, according to EIA data. Regional refinery rates have averaged about 50% since early May, which is helping to keep stock levels at very healthy levels and yielding minimal gas price fluctuation. 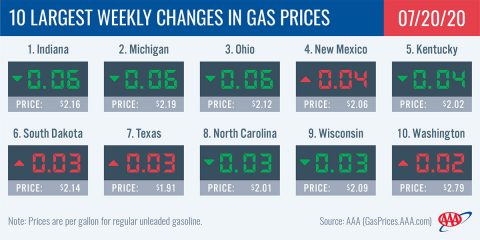 With a build of just over 100,000 bbl, gasoline stocks measure 7.6 million bbl. Stocks have been sitting at 7 million bbl or more since mid-May, which is typical for the summer season. However, levels were as high as 9.4 million in early March. This trend shows that as stay-at-home restrictions are lifted, motorists in the region are driving more. At nearly 90% regional refinery utilization is the highest of any region in the country.

According to EIA’s latest weekly report, total gas stocks in the region increased from 29.6 million bbl to 30.9 million bbl last week. If demand increases in the region this week, healthy stock levels will likely help to moderate pump price increases.

The region saw a significant draw of nearly 4 million bbl, dropping stocks to total of 87.6 million bbl in EIA’s latest data report. This is the lowest measurement since mid-April, but still 4 million bbl ahed of this time last year. Gas prices will likely see fluctuation, though minimal in the week ahead.

Motorists in this region are seeing gas price fluctuation on the week. With a six cent decrease, Indiana ($2.16), Michigan ($2.19) and Ohio ($2.12) top the list for this week’s largest changes in the country. Also landing on the list of biggest changes: Kentucky (-4 cents), South Dakota (+3 cents) and Wisconsin (-3 cents). With a one cent increase, Nebraska ($2.11) was the only other state to see a jump on the week.

Stocks built for the first time since mid-June, which is likely a contributing factor towards the cheaper gas prices for the majority of the region. With a 700,000 bbl add, total levels sit at 51.2 million bbl, which is about average for this time of year.

At the end of Friday’s formal trading session, WTI decreased by 16 cents to settle at $40.59 per barrel. Domestic crude prices fell after EIA’s weekly report revealed that total domestic crude inventories decreased by 7.5 million bbl to 531.7 million bbl. Decreasing crude stocks could mean that crude production is beginning to meet demand, which could stabilize crude prices this week, as COVID-19 Coronavirus outbreaks continue to grow worldwide.