Pasadena, CA – The Rim Fire burning in and near Yosemite National Park in California continues to grow and move its way up in the record books. As of August 27th, CAL FIRE (California Department of Forestry and Fire Protection) reports that the fire, which started August 17th, had consumed nearly 180,000 acres, making it the seventh largest wildfire in California’s recorded history.

The fire is one of 10 active major wildfires burning across California as of August 27th.

New satellite images from NASA’s Aqua and Terra spacecraft illustrate some of the many facets of the fire’s effects on the landscape and atmosphere. The fire’s plume of carbon monoxide pollution is shown in a new image from Aqua’s Atmospheric Infrared Sounder (AIRS) instrument. The still image was acquired August 26th.

The AIRS image shows a three-day running average of daily measurements of carbon monoxide present at an altitude of 18,000 feet (5.5 kilometers) above Earth, as well as its global transport. AIRS is most sensitive to carbon monoxide at this altitude, which is a region conducive to long-range transport of the smoke. The abundance of carbon monoxide is shown in parts per billion, with the highest concentrations shown in yellows and reds. 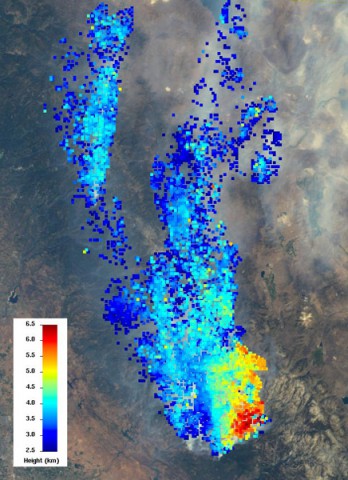 At ground level, carbon monoxide can pose a variety of health risks and is an ingredient in the production of ground-level ozone, which causes numerous respiratory problems. As the carbon monoxide from the fire is lofted into the atmosphere, it becomes caught in the lower bounds of the mid-latitude jet stream, which swiftly transports it around the globe.

The carbon-monoxide plume from the Rim Fire now extends into Canada. Even more prominent in the image are the carbon-monoxide emissions from widespread human-set agricultural fires in Africa and South America, and fires in the northern forests of Asia.

A different perspective on the Rim Fire comes from NASA’s Multi-angle Imaging SpectroRadiometer (MISR) instrument on NASA’s Terra spacecraft. On the morning of August 23rd, Terra passed over the fire, allowing MISR’s nadir (vertical-viewing) camera to capture an image of extensive, brownish smoke. The imaged area measures 236 by 215 miles (380 by 346 kilometers).

MISR views every scene it observes from nine different angles. This unique design allows it to measure the height of smoke plumes using stereoscopic techniques. A second MISR image shows a 121-by-165-mile (194-by-266 kilometer) portion of the scene, where the smoke is thickest. The colors indicate the height of the top of the smoke plume above sea level. The data show that the smoke particles have reached altitudes as high as 4 miles (6.5 kilometers).

These heights have not been corrected for the effects of wind, but have an uncertainty of less than 0.6 mile (1 kilometer). Elevated smoke can be transported great distances from the source, affecting air quality downwind. For example, Reno, NV, has reported air quality well into the range considered unhealthy for all individuals as a result of smoke from this wildfire. 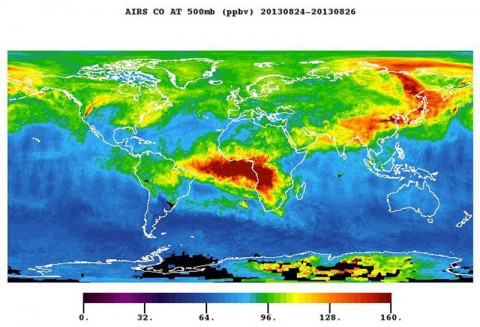 AIRS and MISR were built and are managed by JPL for NASA’s Science Mission Directorate, Washington, D.C. Terra and Aqua are managed by NASA’s Goddard Space Flight Center, Greenbelt, MD. The MISR data were obtained from the NASA Langley Research Center Atmospheric Science Data Center. JPL is a division of the California Institute of Technology in Pasadena.