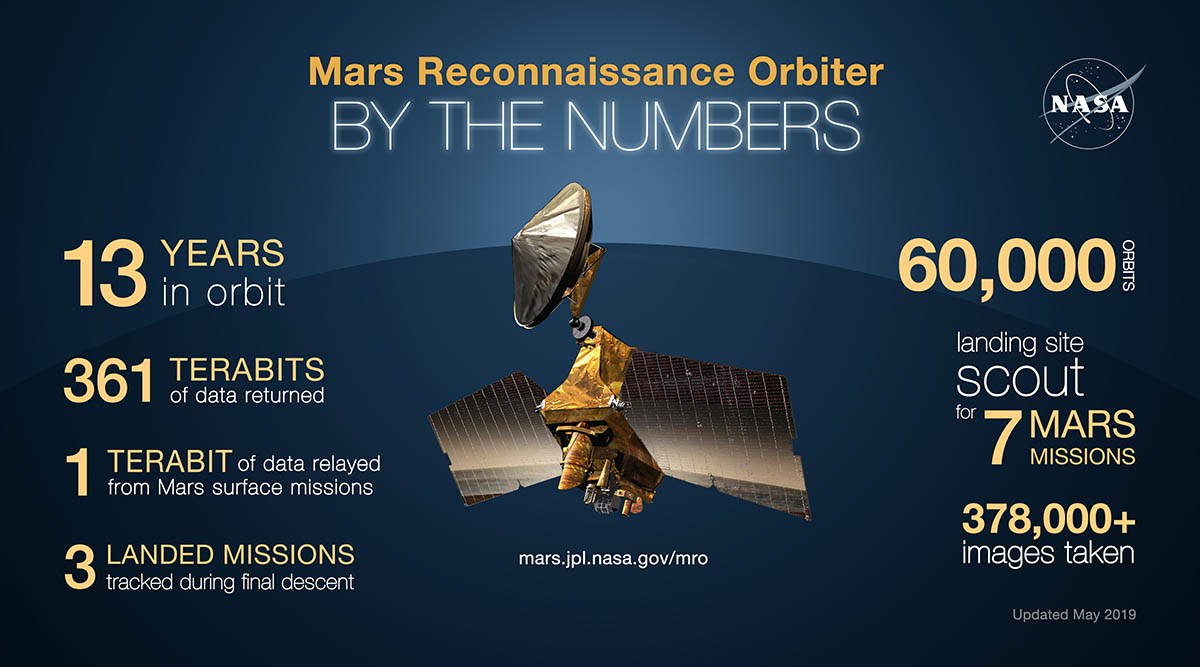 Since entering orbit on March 10th, 2006, the spacecraft has been collecting daily science about the planet’s surface and atmosphere, including detailed views with its High Resolution Imaging Science Experiment camera (HiRISE). HiRISE is powerful enough to see surface features the size of a dining room table from 186 miles (300 kilometers) above the surface.

Meanwhile, MRO is watching the daily weather and probing the subsurface for ice, providing data that can influence the designs of future missions that will take humans to Mars.

But MRO isn’t just sending back its own science; it serves in a network of relays that beam data back to Earth from NASA’s Mars rovers and landers. Later this month, MRO will hit another milestone: It will have relayed 1 terabit of data, largely from NASA’s Curiosity rover.

If you’ve ever enjoyed one of Curiosity’s selfies or sprawling landscapes or wondered at its scientific discoveries, MRO probably helped make them possible.

“MRO has given scientists and the public a new perspective of Mars,” said Project Manager Dan Johnston at NASA’s Jet Propulsion Laboratory in Pasadena, California, which leads the mission. “We’ve also supported NASA’s fleet of Mars surface missions, allowing them to send their images and discoveries back to scientists on Earth.”

Eyes in the Sky 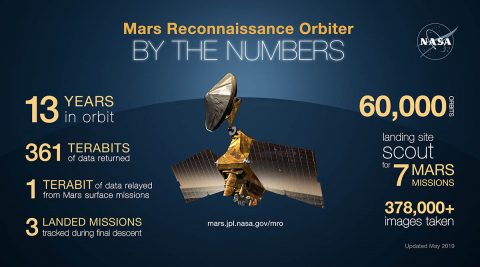 While rovers and landers can study only their immediate vicinity, orbiters can view wide swaths of the entire planet; MRO can actually target any point on the Martian globe approximately once every two weeks.

MRO’s aerial perspective also provides scientists a complementary view of a dynamic planet. As seasons change, they can see avalanches and cloud patterns.

“Mars is our laboratory,” said MRO Deputy Project Scientist Leslie Tamppari of JPL. “After more than a decade, we’ve collected enough data to formulate and test hypotheses to see how they change or hold up over time.”

The Mars Atmosphere and Volatile Evolution (MAVEN) orbiter recently started changing its orbit in preparation to cover the Mars 2020 rover’s entry after it lands in February 2021. After data is sent up to an orbiter, it’s beamed to giant antennas at one of three locations around Earth, all of which are part of NASA’s Deep Space Network.

That relay network is now international. The European Space Agency’s Trace Gas Orbiter has been carrying an ever-increasing share of data sent from the surface. And all of these orbiters are preparing for the arrival of ESA’s Rosalind Franklin ExoMars rover, which is scheduled to land the same year as Mars 2020.

Orbiters like MRO and Odyssey are snap-happy, constantly imaging potential landing sites for future missions. But after a site has been selected and a mission is sent to Mars, orbiters play another critical role.

Before a surface mission can begin conducting science, it has to land safely.

Successful landings require clocklike precision so that the spacecraft enters the Martian atmosphere at just the right angle, the parachute opens at the right time and sensors detect the rapidly approaching surface.

MRO and other orbiters serve as black boxes, recording data about each landing, which grow more difficult with the sort of added mass that comes with a mission like Mars 2020. Engineers use the data to design safer missions – which will be key to sending astronauts to Mars. With plans to return astronauts to the surface of the Moon by 2024, NASA is looking ahead at humans exploring the Red Planet, too.