HomeNewsAAA says National Gas Price Average is Cheaper than One Year Ago...
News

Tampa, FL – On the week, motorists in 32 states are paying less to fill up compared to a year ago. As the national gas price average drops to $2.46 it sets a new low price for the year and is cheaper than a year ago by two cents.

Not only is today’s national gas price average cheaper year-over-year, but also is 31-cents cheaper than a month ago and on the week, 24 states saw gas prices drop double digits.

“Cheap crude oil prices are driving fuel savings at the pump,” said Jeanette Casselano, AAA spokesperson. “Last week crude dropped to its lowest point of the year at $50.00/bbl. However, this week’s Organization of Petroleum Exporting Countries (OPEC) meeting could cause crude oil prices to jump if the organization decides to reduce crude production.”

OPEC is expected to make an announcement on crude production at its December 6th meeting in Vienna, Austria. The scheduled OPEC meeting has not had a negative impact on pump prices so far. 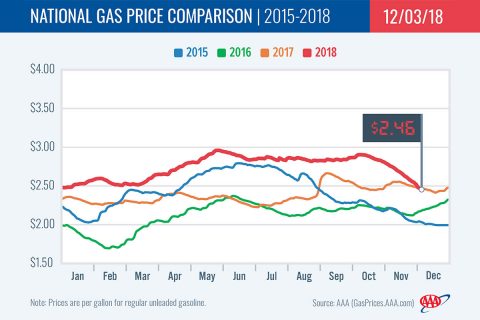 With a four percent jump in regional refinery utilization, stocks built by nearly 680,000 bbl on the week. According to the Energy Information Administration (EIA), the region saw stocks mostly build throughout November. Now at 46.8 million bbl, stocks sit at their highest point since the end of October. 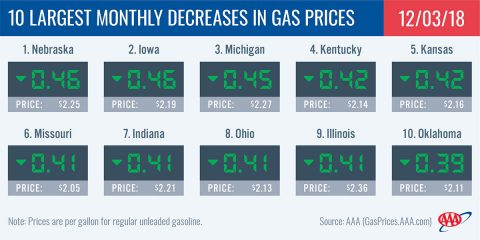 Gas prices are not only cheaper on the week, but also less expensive compared to a month and a year ago across the South and Southeast region.

On the week, stocks drew by nearly 950,000 bbl pushing total levels to 82.8 million bbl. The draw could likely be attributed to a high number of exports since regional refinery utilization jumped to 97 percent, according to EIA data. With utilization up, stocks are likely to build in the coming week and keep pump prices low.

At $2.20, Delaware has the cheapest gas price average of any state in the Mid-Atlantic and Northeast region. It also has the third largest year-over-year difference in pump prices in the country.

Despite a draw of nearly 700,000 bbl, gasoline stocks continue to measure above 61 million bbl, the EIA reports. Regional refinery unitization jumped to 86 percent (from 77 percent the prior week) indicating that a large build could be coming in the week ahead and contribute towards reducing gas prices even further. 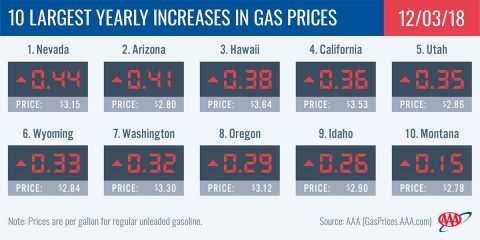 EIA data reports that both regional stocks and refinery utilization remained stable on the week. Stocks continue to register above the 6.8 million bbl mark, a healthy level and about 63,000 bbl surplus year-over-year.

Pump prices in the West Coast region remain among the highest in the nation, with all of the region’s states landing on the nation’s top 10 most expensive list.

The EIA’s weekly petroleum status report for the week ending on November 23rd, showed West Coast gasoline stocks increased by approximately 100,000 bbl to 27 million bbl. Stocks are approximately 1.8 million bbl lower than at this time last year, which could cause prices to spike if there is a supply challenge in the region this week.

At the close of Friday’s formal trading session on the NYMEX, WTI dropped to settle at $50.93. Crude prices continued to fall last week, reaching their lowest point since October 2017. The drop in price has many market observers speculating that at this week’s OPEC meeting on December 6th in Vienna, Austria, the cartel, alongside Russia, will announce a reduction in crude production, aimed at raising the global price of crude.

The exact impact on global prices will be determined by how severe the production cut is and how long the reduction agreement will be held in place. In related news, this morning, Qatar announced it would withdraw from OPEC to develop and increase its natural gas production. The withdrawal will likely not have a huge impact on production as Qatar accounts for just under two percent of OPEC total output.

In the U.S., total domestic crude inventories continue to climb. In the latest weekly petroleum status report from the EIA, crude inventories grew to 450.5 million bbl.  This is strong for the year, even though it is approximately 3.7 million bbl lower than last year’s level at this time. If this week’s EIA report shows another crude inventory build, the news will likely help crude prices remain low.